Skip to content
Grab A Drink, Have A Seat
Animal Rights

Grab A Drink, Have A Seat

Recently, the documentary Cowspiracy was released on Netflix, which as one can imagine, thrilled animal rights activist across the nation.  There are many documentaries that have been created to show the […]

Recently, the documentary Cowspiracy was released on Netflix, which as one can imagine, thrilled animal rights activist across the nation.  There are many documentaries that have been created to show the public whats happening in slaughter houses but, not all are as known as I’d wish them to be.  There are most likely plenty even I don’t know about but, here is a list, in hopes to bring awareness to the affects of animal agriculture.

Film-makers investigate what goes on inside slaughterhouses and the affects they have including deforestation, animal extinction, ocean “dead zones”, and more!

Going behind the walls of slaughterhouses; the abuse, dangerous working conditions, and more are revealed.

A film created to educate viewers on the affects animal products have on ones health.  Stories of those who converted to a plant-based lifestyle in order to improve their health before it continued to decline.  In the documentary doctors are shown prescribing veganism as a cure, though skeptical, clients agree and find out the positive affects of the lifestyle.

This film reveals the reality of animals being captive in aquariums/sea-parks.

“The story of Tilikum, a captive killer whale that has taken the lives of several people, underscores problems within the sea-park industry, man’s relationship to nature, and how little has been learned about these highly intelligent mammals.”

This documentary focuses on the increase of animal product consumption and the concept of speciesism.  Filmmaker, Mark Devries, finds out the truth about factory farming including how the animals are raised.  Speciesism in the ideology that one species is more superior than the other, specifically humans.  The film includes varies interviews and a look inside factory farms.

Focusing on meat consumption and the affects it has on the climate, this film, presented by Marianne Thieme (leader of the Party for the Animals), was created in hopes to teach the public about the consequences of their actions.  The goal was to spark the discussion of how mass production of meat is harming the earth.

“Meat the Truth has drawn attention to this by demonstrating that livestock farming generates more greenhouse gas emissions worldwide than all cars, lorries, trains, boats and planes added together.”

This film is older much shorter than the others but, extremely informative.  The film-makers go into various slaughterhouses showing the mistreatment of animal.  Although extremely hard to watch, it’s the unfortunate reality from millions annually.  The producers aimed to show the public how harsh their lives are whether it’s dairy cows or chickens.

This film focuses on discussing our relationship with animals, ethics, health, the history of veganism and more!

“From butcher to vegan chef, from factory farmer to farm sanctuary owner – Live and Let Live tells the stories of six individuals who decided to stop consuming animal products for different reasons and shows the impact this decision has had on their lives.”

Vegucated follows 3 New Yorkers who agree to follow a vegan lifestyle for 6 weeks.  Throughout the film, the participants soon learn about the affects their old ways had not only on their health but, the planet.  They begin questioning their old choices and those around them making the same ones they made in the past.

The Ghosts in Our Machines 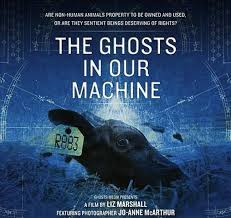 The more recent film, capturing the lives of animals in factory farms along with the new lives of those rescued, has once again provided a look into the inhumane practices taken place before packaging.

“Activist and photojournalist Jo-Ann McArthur uses her camera to document the plight of abused and exploited animals and advocate for their rights as sentient beings.”

Whether you watch 1 or all 10, it’s important that we as people open our eyes to the truth.  Their lives, our lives, the lives of others and the condition of our planet is all at stake.  Help by educating others and yourself; make the switch and spread the word!